At SYPYSA we design, manufacture and install turnkey equipment based on the needs of our clients, justifying the project technically and economically. 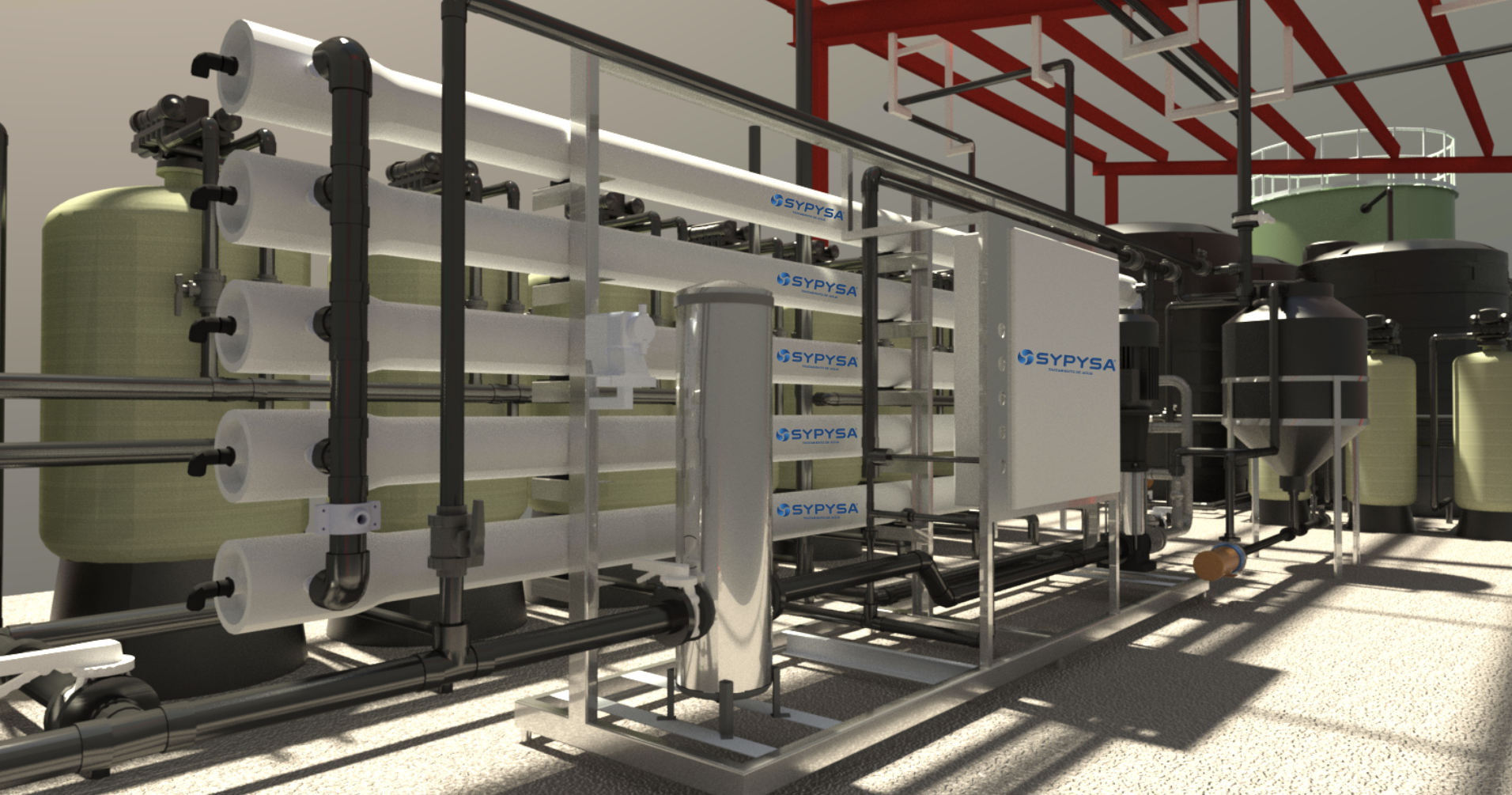 Reverse osmosis is a water demineralization process through the use of membranes that have a porosity of 0.0001 microns, which retains ions, reducing the total dissolved solids of the water between 98 and 99%.

This process does not require the use of hazardous chemicals nor does it generate waste, since the reject only contains the same salts as the feed water, although more concentrated.

In this process, the total dissolved solids are removed from the water through the use of ion exchange resins, a Cationic and an Anionic resin, which are regenerated with Acid and Sodium Hydroxide, respectively.

The cations are exchanged for hydrogen and the anions for hydroxides, the ions contained in the water remain attached to the resins, so they are removed from the water, the released hydrogens and hydroxides combine to form water.

This process requires the use of an acid such as hydrochloric or sulfuric acid and the use of caustic soda for the regeneration of the resins.

Electrodeionization is used to obtain ULTRA-PURE demineralized water, the mineral content is between 0.07 to 0.1 mg/L. Demineralized water from a reverse osmosis or ion exchange process must be fed to this process.

The process is applicable in industries that require very high quality water such as the electronic, pharmaceutical, and chemical industries.

Ultrafiltration is used for the complete removal of colloidal solids and traces of fat, the porosity of the membranes is 0.01 microns and 95% of the water is recovered, since after a working period of 30 to 35 minutes a backwash to clean the membrane.

This process is essential when the water contains colloidal particles.

This process is used to remove hardness from the water, which is made up of calcium and magnesium salts; a sodium chloride regenerated cationic ion exchange resin is used.

The hardness ions are exchanged for sodium, this process does not modify the total dissolved solids of the water since only the calcium and magnesium ions are replaced by sodium.

Chlorination: Chlorination is used to eliminate bacteria and algae present in the water, it acts by destroying the cell wall of microorganisms and oxidizing the organic matter that is their food, thus producing death.

Ozone:Ozonation is used to eliminate bacteria and algae present in the water, just as chlorine destroys the cell wall of microorganisms and oxidizes organic matter, however its effect is much faster than chlorine and it does not produce toxic by-products. since once it acts it degrades to oxygen so it does not provide permanent odor or flavor to the water, its life time is approximately 20 minutes

Ultraviolet Light: Ultraviolet light is used to eliminate bacteria and some viruses from water. When it strikes microorganisms, they modify the DNA, causing their death and their inability to reproduce.

For this process to be effective, it is important that the water is completely free of turbidity and suspended solids, its effect is instantaneous and does not provide residual protection.

Write us to help you and give you more information about:

Our technical advisors will contact you to give you personalized advice.